An abandoned “drug house,” formerly at 161 Jefferson St. in Painesville and boarded up since October 2017, has been recently taken down by the Lake County Land Bank. The organization has demolished 104 homes since its inception in 2013. The Lake County Land Bank, dedicated to stabilizing and/or increasing property values, strengthening communities and helping to enhance the overall quality of life for Lake County residents, has recently identified 82 properties for demolition and currently has 20 demolitions in progress.

Since its inception, the Land Bank has spent $1,848,412 in demolition expenses taking down 104 houses in 17 Lake County communities.

The Land Bank also split cost with the county for the Dworken Bernstein building across from the Lake County Jail in Painesville.

Of a total 110 demolition projects, six were shared projects with other communities, said Land Bank Executive Director John Rogers, who also noted that $971,859 comprised the total cost of the collaborative projects.

“We don’t just necessarily tear things down,” he said. “I physically inspect every home we get. I walk through them and if I think it’s a salvageable home, we take steps to save the home. Unfortunately, there have only been four. Most of the properties we take down, though, are unsalvageable.

“Everything I do is subject to the approval of the Land Bank Board, including the budget. Everything I spent, they have to authorize. We were approached late last year about the possibility of helping Crossroads (1083 Mentor Ave.), and originally they had gotten some Community Development Block Grant funds from the county, but the decision was we would pay for the demolition expenses, and then the county could use the CDBG funds elsewhere.”

A total of $1,351,892 has been spent on improvement/collaborations by the Land Bank, bringing the combined expenses with strictly demolition expenditures since 2013 to $3,200,305.

The Land Bank is currently in agreement with the Lake County Ohio Port Economic Development Authority, renovating a home and working with Auburn Career Center.

Other homes are also in the demolition process, Rogers said, through Land Bank and the Western Reserve Community Development Corp.

“We’ve done work with them where they oversee it, then put a project out for bid,” he said.

Currently, 20 demolitions countywide are in progress, properties the Land Bank owns or has been asked to tear down by various communities, including commercial structures, namely the 18-plus year vacant gas station at 1991 Hubbard Road in Madison Township.

“The Ohio EPA went in and took some core samples and did an analysis and identified all the tanks,” Rogers said. “Land Bank was advised last week that based on the findings of the preliminary analysis, there are funds available through the state’s Abandoned Gas Station Cleanup Grant that may be available to help clean this up.”

Eighty-two properties also have been identified for future demolition, according to Land Bank records. With individual values to be determined, typically, about $20,000 is spent per structure. When a piece of property is identified for demolition, a number of steps are taken, starting with notifying the property owner that zoning code violations exist. The owner is then advised to address the violations in a reasonable amount of time or the structure is condemned.

“The way they do that so they don’t have to spend their own money is the trustees or council of a particular community pass a resolution authorizing the Land Bank to act as an agent on behalf of the community,” Rogers said. “Once I have that resolution, CT Consultants, our A total of $1,351,892 has been spent on improvement/ collaborations by the Land Bank, bringing the combined expenses with strictly demolition expenditures since 2013 to $3,200,305. The engineer orders the asbestos analysis. Once completed, they then have an idea of how much has to be removed, pursuant to EPA requirements and then they put the demolition out to bid.

“We spent $17,949 to tear down a drug house in Painesville. The cops love the fact that we took it down. With that house being taken down, the land isn’t worth $17,000 — it’s probably worth $3,000. But it costs money to clean up garbage. Because communities don’t have discretionary funds that they might have had in the past due to local government cuts, I find the funds to help them eliminate the blight and to the extent that I can, I maintain them until I can sell the properties. Once I sell, somebody will be paying property taxes (on them) in the future and they’ll build something that generates more tax revenue, as opposed to not getting anything.”

The Land Bank also has transferred in excess of 50 parcels of land that it has acquired through the years, giving them to Lake Metroparks and various communities in the county.

Rogers pointed out the domino effect of falling property values, and sees the creation, and the subsequent work, of the Land Bank as a continuing opportunity to increase the quality of life in the county.

“Studies show that if I’m standing in front of a blighted house and I’m looking down the street, the property value of all the houses goes down by 10 percent,” he said. “So how do you measure? Who wants to buy a house on a street with boarded up houses? Just try to sell your house when you live to next one of these. And we’re not using taxes. If you fail to do what you’re obligated to do by law, you get a penalty. And I get a share of the penalty and the interest that’s applied to it. Most of the time, I don’t get those monies until well after they become delinquent.”

As a prosecuting attorney, in his last 18 months, Rogers represented the county in foreclosure cases. Through his role, which he left in July 2011, Rogers said he worked very hard to keep people in their homes, adding it’s always better to have someone living in their house and taking care of it than having the house become vacant and subject to vandalism, drug use or arson.

“The foreclosure rates, if you look at them, in 2010, they’re kind of high,” he added. “People found themselves in difficult situations. In 2011, they (Lake County) certified close to 1,000 homes to be collected on. I worked out payment agreements and take pride in the fact that I was about to keep 600 to 700 people in their homes.”

One argument Rogers quickly pounces on is “the tax” argument, instinctively addressing it with matter of-fact authority.

“Yes, people, they are supposed to pay their taxes, but they didn’t and now they’re paying a penalty, so we work out an agreement pursuant to the law,” he said. “Situations range and people get tight now and again, especially in an economic downturn. The Land Bank has given me the opportunity to not only help people in my district, but in all of Lake County, and we continue to make progress.” 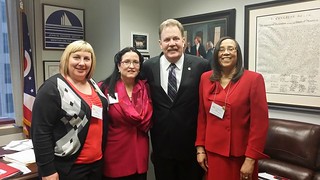